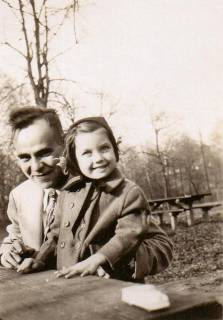 The Deans and the Cramers 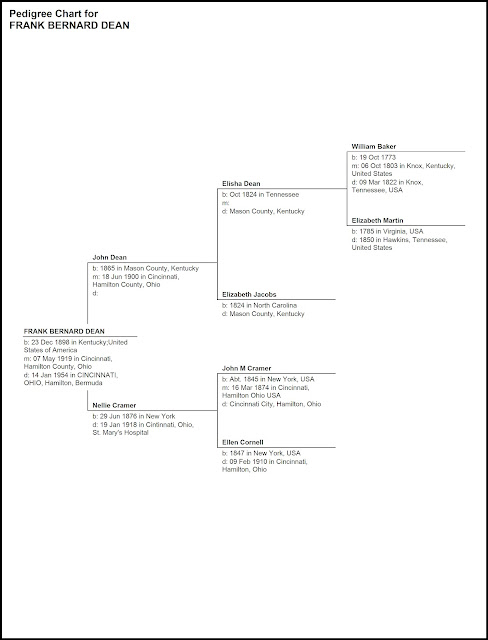 John and Nellie
Using the information my grandfather Frank provided about his parents at the time of his marriage to my grandmother, I discovered a marriage record for Hamilton County, Cincinnati, for his mother and father, Nellie and John Dean, dated June 18th, 1900.  This was three years after Frank was born.

The document states that John had been divorced prior to this marriage, and it may be that he was not free to marry Nellie before then, even when she became pregnant with their son. 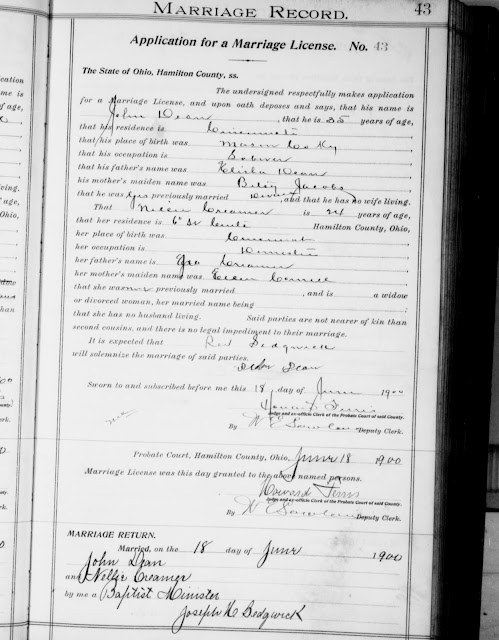 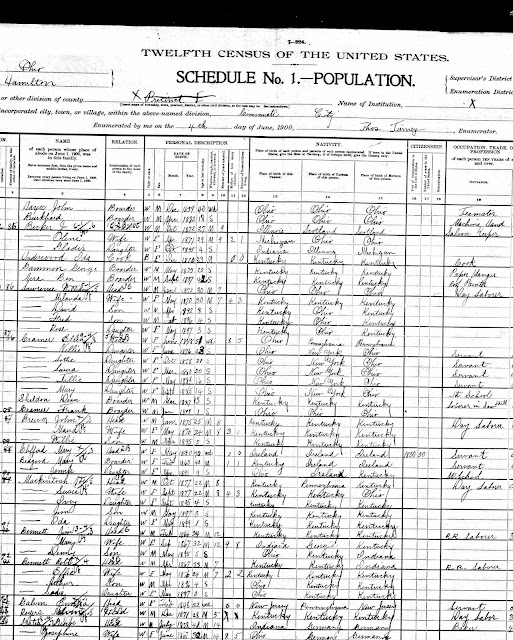 The two listed boarders are Dean Sheldon (could the census taker have reversed the name, and should be Sheldon Dean?), age 13, and Frank Cramer, age one year.

Obviously, Frank Cramer is Nellie’s and John’s son, Frank, my grandfather.  Nellie had given birth to a child fathered by a married man, most likely, and either gave him her own maiden name, or the census taker had reason to list him as a Cramer.  After his parents’ marriage, all future records are in the name of Frank B. Dean.

The 13-year-old boarder, Dean Sheldon, who I questioned as having his name reversed, does later show up
in the 1926 city directory as an attendant at Cincinnati General Hospital, no home address noted.  Since no other Dean Sheldon appears on further records, this most likely is the 13-year-old laborer in a saw mill from 1900, living with the Cramers.

Ten years later, the Williams Cincinnati Directory for 1910, shows Nellie residing at 658 West Fifth Street, which would be at the corner of Fifth and Central Avenue, downtown.  The listing reads:

On March 30, 1910, Nellie married Joseph O’Flaherty. She signed the document as “Mrs. Nellie Dean,” and she asserts that she’s had a prior marriage. 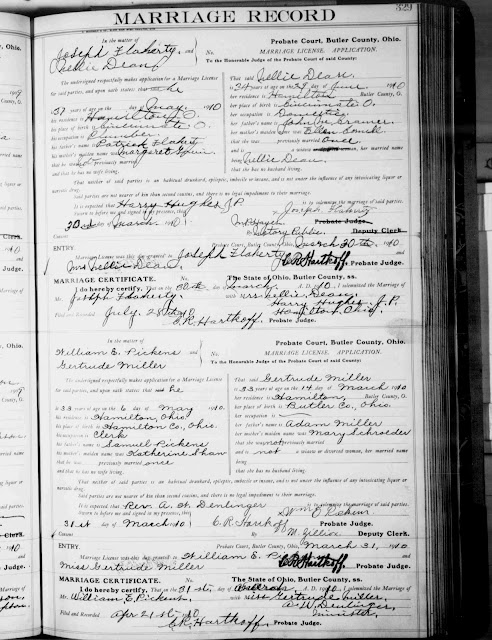 On the census that year, after Nellie’s second marriage, Frank, now age 10, is living with his mother Nellie and his step-father, Joseph J. O’Flaherty, at 1062 Cutter Street, in the West End, along with his younger sister Ettie Dean, age eight, who was born in 1902, no month or day given.  She was born two years after her mother and father, John, got married.

The 1910 census is dated April 29th.  Joseph and Nellie O’Flahrety had been married a month. 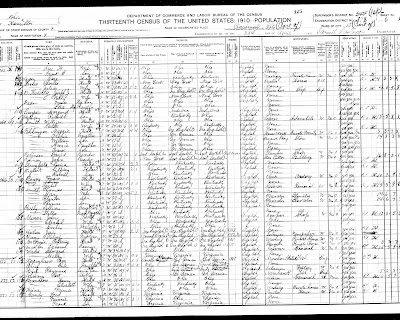 Eight years after her marriage to Joseph O’Flaherty, Nellie died on June 19, 1918.  Cause of death is listed as mitral valve insufficiency.  She died at St. Mary’s Hospital in Cincinnati.  At the time of her death, she and Joseph were living at 1511 Cutter Street in Cincinnati, the same street as in 1910 but a different number. 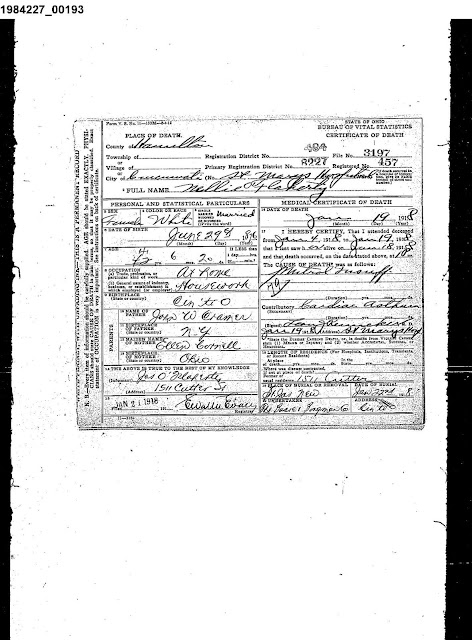 One month after Nellie’s death, her son Frank married Clara Wehrle, on May 6, 1919.  She didn’t live to see the birth of her first grandchild, my father Raymond.  She died two years before her daughter Ettie is listed as an inmate at the Institute for Feeble Minded Youth.

Two years after her death, according to the 1920 Census, Joseph James O’Flaherty is living with a couple, William and Allie Allen, and their two children, Robert and Ethel, in Cincinnati’s Sixth Ward.   Ettie is not listed and so must have already been placed in the Columbus Institute.

The 1920 Census shows Nelly’s daughter, Ettie Dean, an inmate in the Columbus Institution for the Feeble Minded.

Researching the institution, I find that children and youth with learning disabilities, probably similar to  today’s ADHD diagnoses, were placed here.  Some sources stated that also unruly children and young adults, run-aways, etc., were placed in the Institute.  The census reflects that Ettie, or “Etta," as she is listed, was able to read and write and was born in Ohio.  Her father was born in Kentucky, and her mother in Ohio.

The Institution for Feeble-Minded Youth enrolled both boys and girls. These children struggled in the public schools of their own communities, and the institution gave the children a chance to enroll in a more supervised and stringent setting. The Institution for Feeble-Minded Youth also provided the children with vocational training, with the boys working on a farm owned by the school and the girls performing domestic duties. This institution helped provide students with various learning and social problems with the skills necessary to lead productive lives. ~ Ohio History Central.org.

Ettie presumably died at the Columbus Institute.  I’ve found no further records for her.  She was, by all reports, Frank’s only sibling.

John Cramer and Ellen Cornell
In 1910 census, Nellie lists her parents’ names as John Cramer and Ellen Cornell, both having been born in New York.  However, Ellen lists herself on all documents as being born in Ohio.  With this information, I turned up a petition by Ellen for replacement of her March 16, 1874 marriage certificate which had been among those destroyed in the Hamilton County Courthouse fire of March 29, 1884. 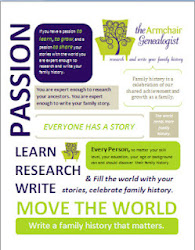